In the controversial series, dozens of individuals are interviewed including some who allege that the multi-platinum artist has systematically abused women, mentally, physically and sexually. There are also allegations of witnessed impropriety between him and his then-underaged protege, Aaliyah.

Kelly has long denied any and all allegations against him.

According to The Blast, since the series aired, Kelly’s music has experienced a sizeable jump in interest, including a 16% bump in streams on his 2002 single, “Ignition,” on Spotify.

In her post, Smith went on to ask fans to offer their opinions in the comments section. She also said that she intends to continue this conversation on Wednesday at 5 p.m. PST on Facebook Live. Captioning the video, “How is it that R Kelly’s music sales have spiked (substantially) since the release of the docuseries Surviving R Kelly? I need some help in understanding. What am I missing???”

“And I really don’t wanna believe that it’s because black girls don’t matter enough, or is that the reason? Let me know,” Smith concluded in the clip.

The 47-year-old actress isn’t the only celebrity who has spoken up on the docuseries. Chance the Rapper has also weighed in after quotes from the performer were included in the series’ final episode on Saturday. He apologized online to fans for working with Kelly on the 2015 single “Somewhere in Paradise” and defended himself.

“I apologize to all of his survivors for working with him and for taking so long to speak out,” he wrote on Instagram, also setting the record straight on some quotes from him that were included in the series suggesting he “didn’t value the accusers’ stories [because] they were black women.”

“The quote was taken out of context, but the truth is any of us who ever ignored the R. Kelly stories, or ever believed he was being setup/attacked by the system (as black men often are) were doing so at the detriment of black women and girls,” he wrote. 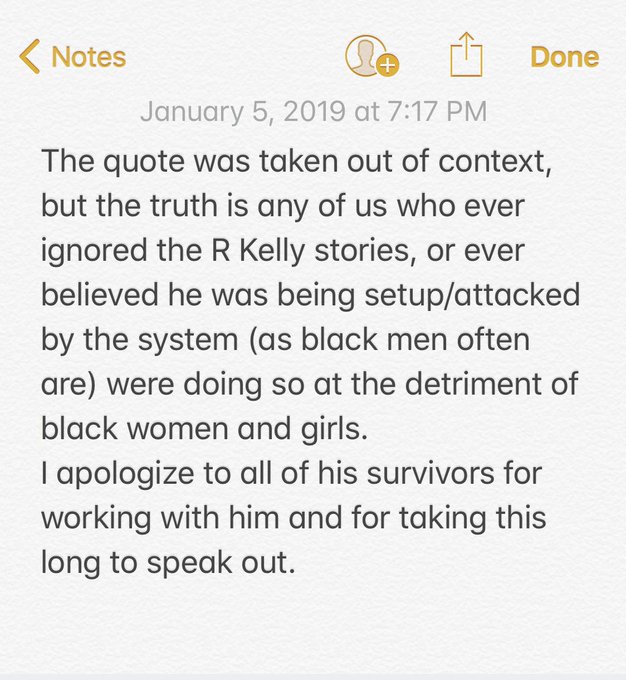 John Legend, who also appeared on Surviving R. Kelly, has since offered a scathing tweet explaining his choice to participate.

“To everyone telling me how courageous I am for appearing in the doc, it didn’t feel risky at all,” he wrote on Thursday after the first episode aired. “I believe these women and don’t give a f**k about protecting a serial child rapist. Easy decision.”

To everyone telling me how courageous I am for appearing in the doc, it didn’t feel risky at all. I believe these women and don’t give a fuck about protecting a serial child rapist. Easy decision.

Meek Mill also tweeted a response to the series on Saturday, writing, “I’m not feeling R after watching that …. it’s so much filthy s**t going on in this industry nobody will ever really speak on the wild s**t because most of them could have docs like this or even worst done about them!”

I’m not feeling R after watching that …. it’s so much filthy shit going on in this industry nobody will ever really speak on the wild shit because most of them could have docs like this or even worst done about them!

How you feeling about this Rkelly docu #AskMeek @MeekMill

Get more news on Kelly down below.